She is very small and very quiet and gentle.  A real little lady.

She can be a bit nervous so a secure garden is very very important.

And she wants an adult only household

Perdy has settled very well. No toilet accidents for 4 or 5 days now. Still sleeps quietly in her crate at night and has been left 3 hours in the crate and half an hour out of it. Getting a bit more mischievous. Toilet rolls and paper left lying around is fair game and she did help herself to a cookery book, but no real destruction, just exploring and being happy. She is always very contrite when gently told off. The toys are getting quite a work out now and she has attempted to get Keena to play several times with no success, but fortunately she is still remains subservient and doesn’t push it when ignored.

Last night she attended class and was polite to all the dogs she met but a bit over awed by it all. She did managed to go through the tunnel and over some little jumps and practice some recall but was glad to get back home I think. Today we walked up Butser Hill and she was on high alert for Rabbits but still didn’t pull on lead.

Terrier x Whippet we think, she stands around 19 “ to the shoulder and is around 6 years old.  She is quiet around the house (hasn’t barked yet), non destructive (apart from a liking for empting waste paper bins) and sleeps most of the day although she does like to know where I am and follow me around. I think she would be happier with someone around most of the day and could be an only dog, but gets on well with other dogs too and lives with three other sight hounds at the moment.

Not overly into toys, though she chews on a squeaky toy occasionally and quite likes a chew and stuffed food toy but not that bothered  (but dinner goes in a flash). She sleeps all night in her crate and has been left crated for over 2 hours when we were out with no problem and would probably be fine uncrated once house training was 100%. House training is generally fine during the day, a bit iffy once dark (but then trying to house train during firework season is not the best time).

She doesn’t pester at meal times but I wouldn’t ever leave food unattended and I am glad she is too small to reach the back of the worktops!

Out and about she is very well behaved, polite around dogs and people, (interested but not over the top), and walks really nicely on lead. She does spend some time gazing into the distance looking for rabbits and is alert to every rustle in the undergrowth and I would think her prey drive is probably fairly high and care would be needed letting her off lead with lots of recall practice in enclosed places for a few months first to see how she responded. She seems quite happy trotting around on lead though.  She travels well in the car

All in all a very nice, well mannered little girl. Nervous of sudden movements and loud noises but getting better. Initially she was totally panic stricken over fireworks but now coping well by hiding away in her crate which is covered over)  I think she will settle quickly in a new home but prefer a  fairly quiet adult only home as visiting children/grandchildren would probably stress her.

Girly is in foster in Hampshire. 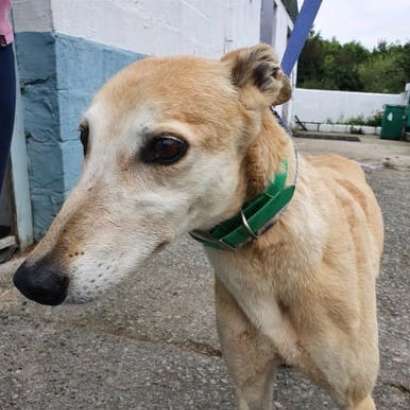 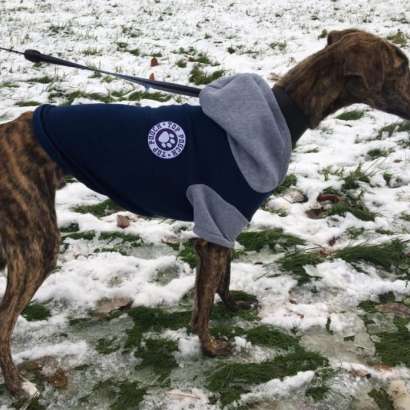 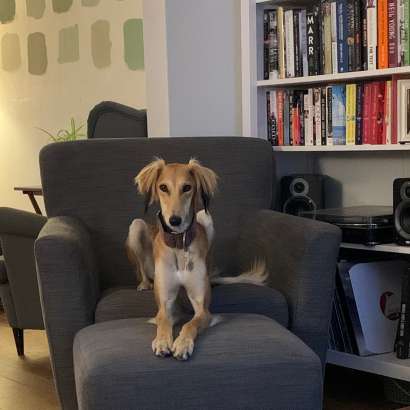