Yup, it’s that simple. Growling is a vocal expression of a dog’s discomfort which generally follows visual cues that have been ignored or unnoticed by the humans.

Growling gets a bad reputation because humans find it embarrassing if their dog growls but the poor dog is just trying to say please stop doing whatever you are doing to me right now because it is making me so uncomfortable I might resort to biting.

Never ever ever punish a dog for growling. The end result will be that the dog goes right from the ignored visual cues to biting without that important vocal warning.

Dogs have a right to communicate they are uncomfortable with certain things they are exposed to. Now, if your dog is uncomfortable at the vet he may still need to submit to an examination for his own benefit in which case you can teach him to be comfortable wearing a muzzle. If, on the other hand, your dog is growling because someone is pulling her tail, it isn’t the dog who is wrong, it’s the tail pulling that needs to stop.

Before the emergence of the alpha myth in the 1970s and earlier, a growling dog was left alone. People understood that growling was a warning. After the 1970s, “dominance theory” became widely popular and the growl was reinterpreted to mean the dog was trying to dominate humans so traditional dog trainers and handlers began to punish dogs for growling.

Wild wolves and domesticated dogs are separated by thousands of years of evolution.

Today we know that dominance theory, AKA the alpha myth, is based on flawed science and has been debunked even by the very scientist who came up with it. Briefly, the theory came out of a study of captive non-related wolves housed together who fought for dominant positions in their artificial pack. In reality, wild wolves live in family groups and prominent positions in the pack are held by parents who are given deference by offspring much like in a human family.

Modern domesticated dogs absolutely do not want to dominate humans. Nothing they do is intended to become “pack leader” of their mixed species household. Unfortunately, even tragically in some cases, too many people, including traditional dog trainers, still promote this inaccurate theory today.

Dominance is a social relationship, not a personality trait. In the dog world, dominant behaviour is conspecific (meaning it occurs only between members of the same species) and situational. It occurs when two dogs both want access to a resource of equal value, like a comfy bed or bone, and aggression to secure the resource is used as a last resort.

Dogs are far more visual creatures than humans and use a wide variety of visual cues to communicate with each other. An example of this is the “puppy bow,” the universal dog posture that means let’s play!

When a dog feels uncomfortable for whatever reason, she will show you with her facial expressions and body postures before escalating to growling. Much like humans, a stressed dog will hold her jaw tighter, wrinkle her eyebrows together, she may lick her lips or yawn which are called appeasement gestures in an effort to show she is not a threat and does not want to fight. She may lift one paw off the ground or tuck her tail between her legs.

Only if all of these visual warning signs are ignored, will a dog resort to growling. If the growling goes unheeded, she may snap at the air which is her last resort before biting. You can see from this progression that if you teach a dog that growling results in punishment, she may feel forced to go from licking her lips to biting. This is why you often hear people say a dog “bit out of nowhere,” the dog did give warnings, they just weren’t understood by the humans.

You can see that dogs try to express themselves visually in many ways before resorting to physical threats and actions.

Teach your family to watch for the warning signs that a dog is uncomfortable so that he doesn’t ever get to the growling phase. Also teach them to back away slowly from a growling dog. This in no way encourages growling, you are simply respecting that the dog has communicated her discomfort to you. The more you observe your dog, the more familiar you will get with his communication style. This will keep you safer and even deepen your relationship with your dog because he will come to understand that you “get” him. 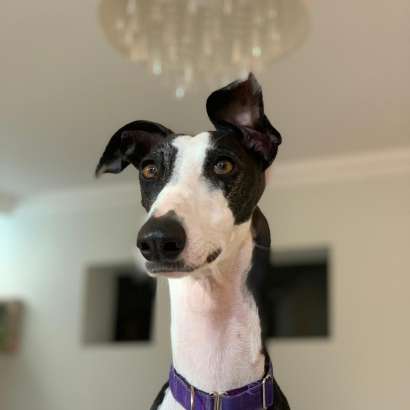